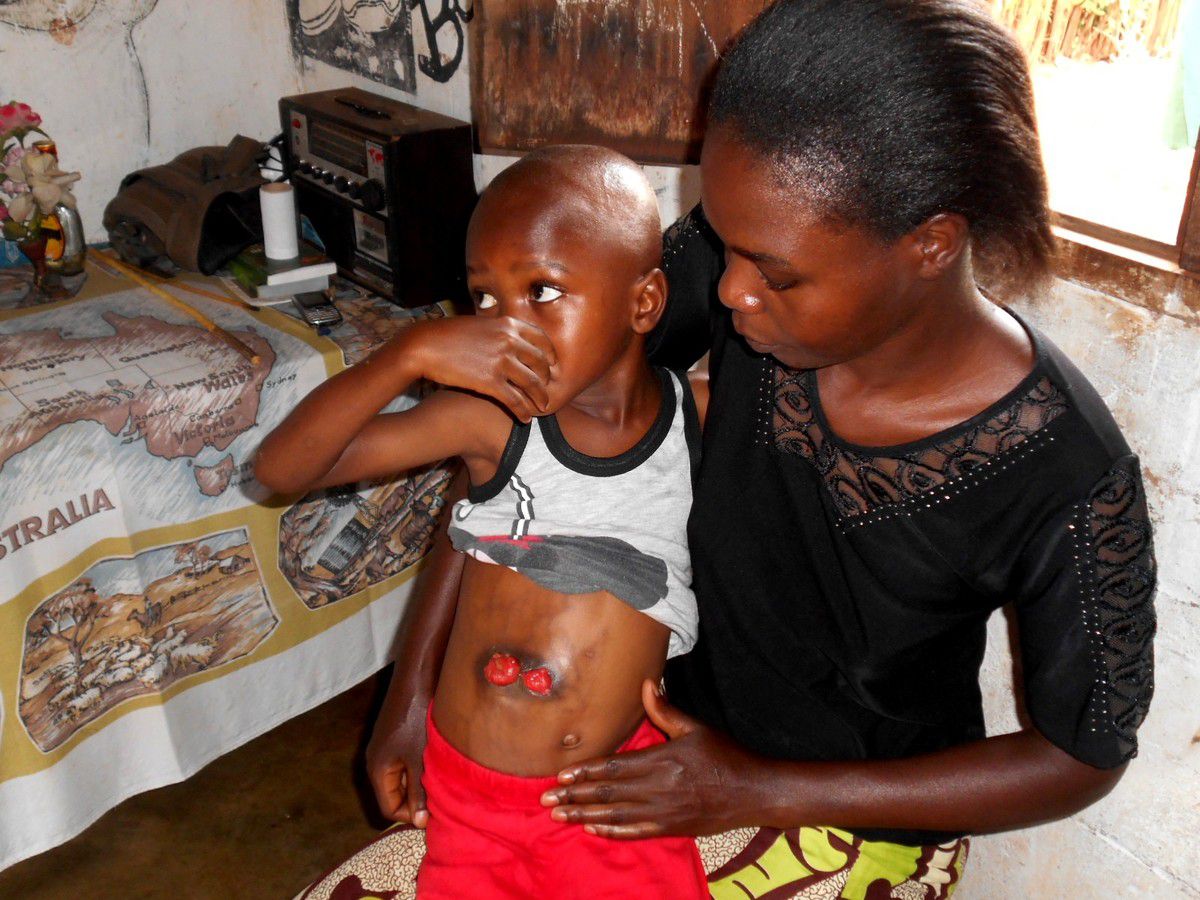 The young boy walks laboriously around their compound,  his clear eyes scanning the vehicles passing near the Voi –Mwatate road.

Shortly afterwards,  he resigns and sits on a small chair under a shade. His mother comes over and inspects two seemingly painful wounds on his abdomen.

However, these are not ordinary wounds. On close examination, master Daniel Mwadime has once again soiled his clothes with faecal matter, shortly after taking a light meal.

His mother Miriam Saru (26) a house wife at Landi Village, Taita-Taveta county, is a sad and depressed woman.

His son suffers from a medical condition characterized by fecal incontinence that forced her child to undergo a colostomy at the age of nine, where two incisions were made in his large intestines to enable the boy pass stool.

The congenital blockage of the boy’s rectum forced doctors to undertake the painful operation to enable the boy survive.

However, his mother Saru feels there were better ways of addressing the boy’s condition.

“The boy was delivered with the problem of failing to pass stool normally. So I took him to Mwatate hospital where the doctors used a pump to push out stool from the body. After that, the condition lessened and the boy was able to defecate normally until the age of nine months when the problem became apparent again,” says Saru.

The distraught mother says she rushed the boy to the Moi Hospital in Voi but after a short examination she was referred to Coast General hospital .

“The doctors alleged that there were germs in the child’s gut. This was enough of bad news to me as I did not know what to do to save my child from the agonizing condition,” she says remorsefully.

She says the doctors performed an operation on the boy’s abdomen, claiming there was no other way to enable the boy pass stool through the normal way.

After the operation the boy was left with two holes on his abdomen from where he has been passing stool to date.

“The boy cannot live the life of a normal child as he hardly gets appetite to eat and once he does, he releases stool after a short while. This has led to severe deterioration in his health. The boy cannot also play as any slight impact on the belly forces the intestines out, gushing with stool. This is one reason why he cannot join school as I need to be with him to clean him regularly” says the mother.

She says owing to this, she has been unable to get any kind of job as she has to be at home, always helping the boy.

“My husband Sammy Mwawunghanga is a jua kali artisan and his income is very little to support the family and I could easily have looked for even casual work to compliment the family income but this has been virtually impossible due to the boy’s condition,” she says ruefully.

However, she says she has received encouraging reports from her neighbours that the boy can undergo another operation to restore  normal passage of stool.

“A medical expert has advised me to take the boy to Kenyatta National Hospital. He says the surgery might cost up to Sh 500,000, the kind of money I cannot afford to raise,” says Saru, with a resigned look on his face.

As  she curdles the boy lovingly, she cannot suppress tears from flowing down her face, saying she leaves the fate of her child to God.

According to Wikipedia, colostomy is a surgical procedure in which an opening (stoma) is formed by drawing the healthy end of the large intestine or colon through an incision in the anterior abdominal wall and suturing it into place. This opening, in conjunction with the attached stoma appliance, provides an alternative channel for feces to leave the body. It may be reversible or irreversible depending on the circumstances. There are many reasons for this procedure. Some common reasons are:

*A section of the colon has been removed, e.g. due to colon cancer requiring a total l excision,   so that it is no longer possible for feces to exit via the anus.

*A portion of the colon (or large intestine) has been operated upon and needs to be 'rested' until it is healed. In this case the colostomy is often temporary and is usually reversed at a later date, leaving the patient with a small scar in place of the stoma. Children undergoing surgery for extensive pelvic tumors commonly are given a colostomy in preparation for surgery to remove the tumor, followed by reversal of the colostomy.

*Fecal incontinence that is non-responsive to other treatments. This is the case with Daniel Mwadime who according to his mother, could not respond to other treatment that could enable him pass stool normally through the rectum.

Going nuts:Taita-Taveta farmers set to reap big from macadamia
I want to be the first women rep with disability in the country, says Taita-Taveta MCA
Comment on this post
F
Family Finder DNA test
08/04/2016 10:27
It feels awe-inspiring to read such informative and distinctive articles on your websites.
Reply