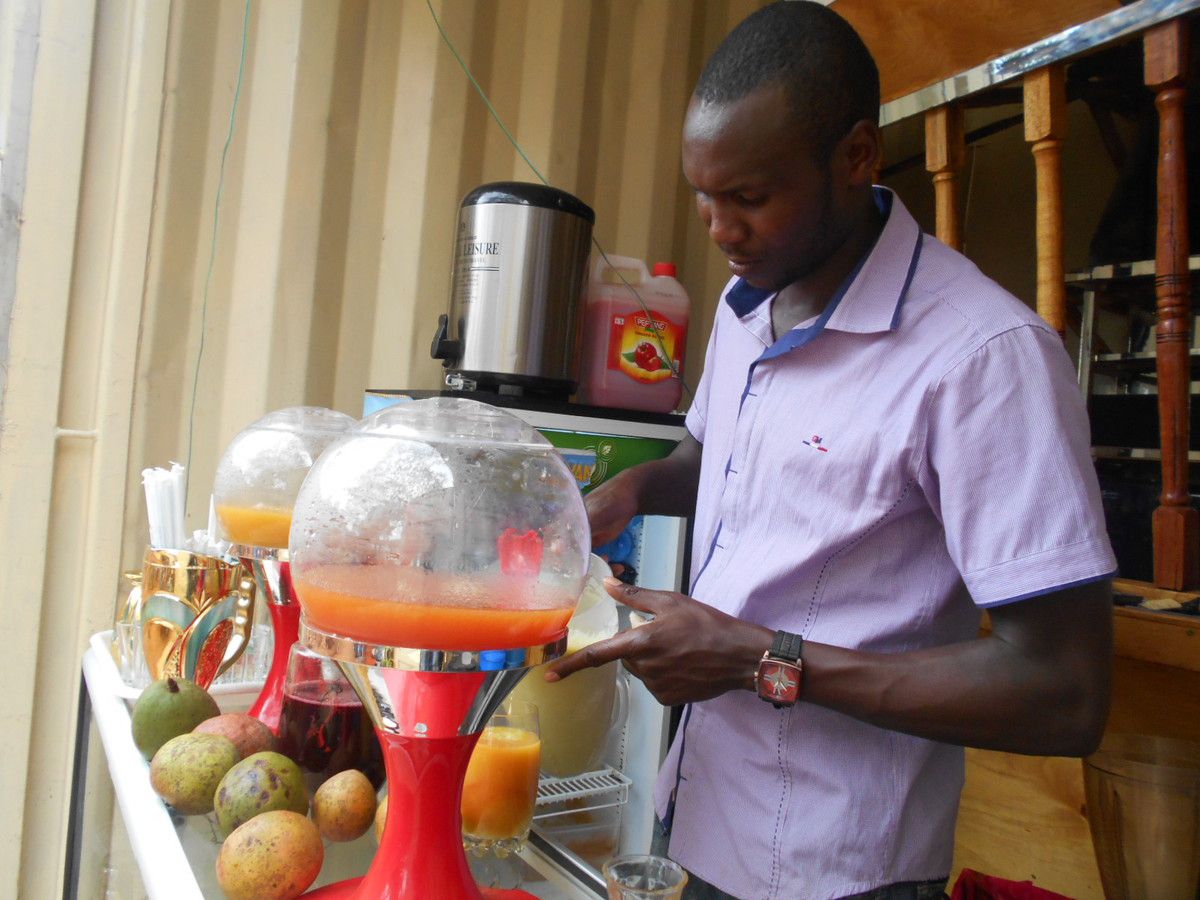 The business was among the four small kiosks carved out of a forty feet container located astride the Voi-Taveta road. The location was seemingly ideal for the business.

“Gemstones business can be very unpredictable especially for us small scale dealers, locally referred to as zurura,” says Mwangemi.

Mwangemi says he bought his first stock of spirits worth Sh52,000.That was in January this year.

“Business was doing well at first as customers used to flock to my business to drink; especially low-end drinkers who cannot afford beer and other expensive alcoholic drinks” .

He says on average, he used to make Sh 6,000 a day. “That was not a bad beginning for me and I worked hard, hoping to expand the business into a fully fledged bar when income increased”.

However, six months later his business went into a tailspin. The crackdown on illicit and second generation drinks that was ordered by the president caught him unawares.

“Security officers would regularly raid my business and confiscate drinks. There was tension and  anxiety as most of my customers either stayed away or took their drinks in fear, lest they were arrested and charged”, says Mwangemi without any sense of remorse or rancor.

However, he began musing deeply on what to do to sustain the business that was clearly headed for headwinds.

“I was paying a monthly rent of Sh6,000 per month and had also previously paid a tidy sum for a  licence. Clearly I had to break even or break up the business”.

He says despite the fact that none of his customers suffered any serious health implications from the drinks he sold, he had to abide by the law all the same.

Mwangemi says that the last straw was when he purchased a new stock of drinks worth Sh 37,000.Coincidentally,virtually all the drinks were those being targeted in the crackdown on second generation brews.

“I had to sell the drinks under an atmosphere of tension and anxiety for fear of being arrested,  but all the same I had to recover my money” he says.

“I almost hanged up my boots in despair , as I thought of an alternative business venture,” says Mwangemi.

He says pressure and anxiety of selling sprits in such an environment was draining him  both psychologically and financially.

“After a lot of soul-searching, I thought of converting my wines and spirits business into a juice parlor. I knew this could not have fetched the good returns I got from selling alcoholic drinks but on a positive sense, I would have peace of mind,” he says adding: “I know most of my customers had in one way or the other abdicated their roles in their families and chose to waste their money on alcohol. I even felt sorry for them. Finally, I decided to start a fresh fruit juice business”.

During that transformative stage Mwangemi changed the name of his business from “Forty Feet Wines and Spirits( forty feet from the length of the container)to “Havilla Fruits Juice Garden”.

“I bought a blender worth Sh5,600 and a stock of fresh mangoes costing Sh 500.I also bought juice dispensers and utensils. This was my chance to help transform some of my earlier clients who were drunkards. Most of them have appreciated this change and occasionally visit my business to sip fruit juice of different types” says Mwangemi with a glow of contentment on his face.

He says his new venture earns him between  Sh 3000 toSh 4,000 a day, which though not as much as he used to make through alcoholic drinks, he is much happier and peaceful.

“Better to earn less in dignity and peace of mind than to earn a lot in an atmosphere of disturbance and anxiety” he says conclusively.

“Better to earn less in dignity and peace of mind than to earn a lot in an atmosphere of disturbance and anxiety” .

Lobby against community land bill,Mruttu challenges Coast MPs
Advertorial. Land with gemstones and iron ore on sale in Mwatate
Comment on this post
H
home maids dubai
06/16/2019 13:45
Any clean and also spotless home can be a home you will be comfortable inside – that’s that which you want per customer, only at Pretty Residence. And that’s why currently quality house cleaning services with affordable rates – to offer people inside Dubai and also Sharjah a less strenuous means regarding keeping their particular homes inside good buy. We use a team willing to service your property with experience and professionalism and trust.
Reply
O
Obat Wasir
06/17/2016 07:22
Thank's very much. Nice post
Reply
O
Obat Ambeien
06/17/2016 07:21
Really good
Reply