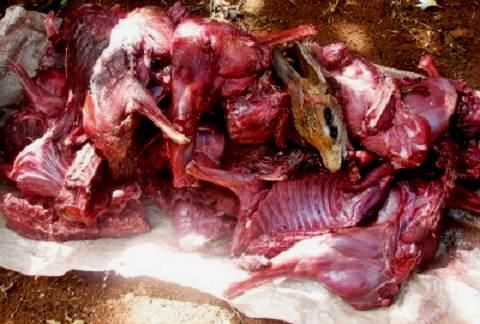 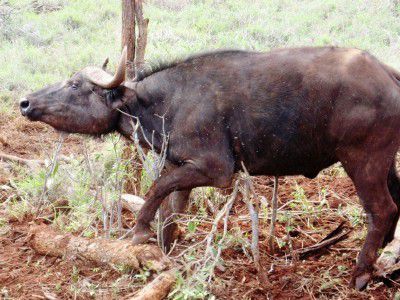 In the blazing noonday sun, a shabbily dressed man cycles through the small shopping center in Ndome village in Voi constituency, Taita-Taveta County. He stops and wipes sweat from his face and sighs.

He offloads  sacks of charcoal from his bicycle .Immediately his regular customers get the cue and emerge from their houses to buy the commodity.

While charcoal is the main source of fuel here, there is more to it that just meets the eye: bushmeat. Most of this illegal delicacy is disguised with charcoal so that it can pass unnoticed.

The bush meat trade has proved quite lucrative as the meat is cheaper than beef or goat meat.

“I have never known it’s illegal to buy bush meat. We have been eating mwakuli(dik dik) since we were young. The meat is relatively cheap,a kilo going for as little as Sh 100”, said  Job Mlagui, a resident of Ndome village near Tsavo East National Park

But as conservationists and government security machinery are working  hard to stem the rising poaching menace in Tsavo National Park targeting jumbos and rhinos for their horns, poaching for bushmeat, despite reaching unprecedented levels, has not received much attention yet.

While  poaching for elephant tusks and rhino horns has been blamed on illegal herders with sophisticated arms the bush meat trade has largely targeted local markets for consumption purposes with crude weapons been used..

A senior KWS officer in theTsavo Conservation Area(TCA) said concerted efforts were needed to save small game from the ruthless poachers.

The officer says while in the past game census has largely been for the big animals such as jumbos, it’s imperative that population figures of small game especially outside protected areas was put in check as some small animals might be wiped out.

“We are now keeping tabs on the numbers of small animals so that we can establish their population trends. This is the safest way of mapping out ways of dealing with the bush meat threat”, said the KWS officer.

He attributed the rise in bush meat poaching to weak laws that do not act as a deterrent.

“Poachers should face tough punitive measures such as jail terms of up to 20 year. The issue of presidential pardon should also be addressed so that convicted poachers can serve full sentences in jail” he says.

One of the rarest antelopes only found in Tsavo, the Hirola , could quietly be wiped out by the poachers for its meat despite its endemic status.

Poverty in areas around protected areas has largely been blamed for the increase in bush meat trade .

Poaching for bush meat, unless put in check, might wipe out small game outside protected areas, especially in the ranches.

Investigations have revealed that the dik dik has already been wiped out in most ranches in Taita-Taveta ,and next to go will be the impala, whose meat is said to be popular like goat.

“One of the greatest threats facing wildlife today are bush meat trade and habitat loss,” says Donald Mombo, a wildlife and tourism consultant .

Mombo says the drought ravaging the areas around Tsavo has left many locals in abject poverty ,leaving them with no option but to rely on bush meat as a source of food.

“If communities around Tsavo are economically empowered and educated on the value of wildlife, they may desist from poaching for bush meat,” says Mombo.

Although bush meat might be cheap and popular it poses serious health risks to the consumer.

According to a livestock health officer in Voi Mr Senzige Mruttu, eating uninspected game meat can expose one to bovine diseases such as anthrax and even ebola virus.

Why war on bush meat is being lost

The battle against the growing illegal commercial trade in bush meat is being lost mainly because:

-Bush meat is cheaper than beef, thus it’s a cheaper source of protein to rural and urban poor.

-Rising poverty and landlessness among communities living adjacent to wildlife rich areas worsened by the prevailing drought and food shortage in the country.

-Rising incidents of human-wildlife conflicts and lack of compensation for such loses caused by wildlife.

-Weak wildlife laws that that do not give deterrent fines and sentences to convicted poachers and traders.

-Poor knowledge of wildlife laws leads to wildlife crimes being categorized as misdemeanour.

-Serial poachers are treated as first offenders in wildlife crimes and most of them are able to pay small fines imposed and quickly return to make easy money from the illegal trade.

-Continued impasse on the wildlife policy review leading to disenchantment by communities and landowners hosting wildlife (outside the tourism circuit) making them turn a blind eye to poaching and other wildlife crimes.

-A blanket ban on consumptive use criminalized what had been part of the culture and source of food for communities who live near wildlife such as the Taita, Kamba, Mijikenda and the Turkana.

Humour:Living on the edge of a world gone insane
Historical justice:Death on the cliffs for Taita social misfits
Comment on this post